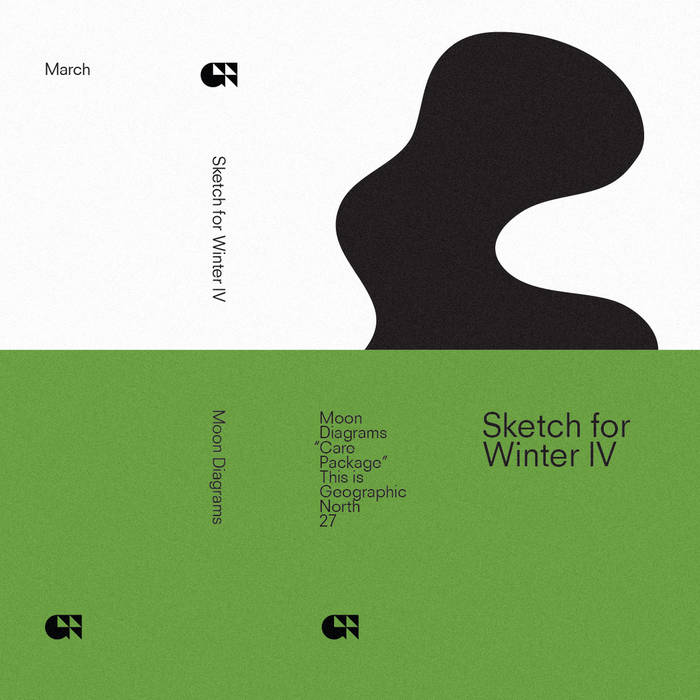 As Moon Diagrams, Moses Archuleta takes a few comfortable and casual steps away from being Deerhunter's co-founder and all-around percussive extraordinary to spend some quality time with a few hidden pleasures.

Sketch for Winter IV: Care Package, Moon Diagrams' debut release, rounds out our winter cassette series in a paced propulsion of braced percussion and muted melody, burning off any residuals from the receding autumnal embers. The slow and steady rhythm of "Scratch the Snow" trots along with steadfast subtlety, ushering along the striated synthesizer chords that chop through the air with Reich-ian precision and Kompakt-esque modernity. As the frost begins to creep in, Archuleta lights a low fire in the form of warm, tonal throbs and doubled over drum loops. Soft shards of sound invert themselves in intersecting, omnidirectional lines. The overall effect is palindromic - gentle waves of headphone electronica, without the tired connotations the tag denotes. The organic, pulsing hum rides its course in an unencumbered drift before dissolving into a heartfelt and heartbroken interpretation of "Sweet Surrender," a modern pop classic that unassumingly carries a formidable baggage all its own.

Archuleta strips away certain components of the original version, leaving plenty of room for the song's tragically catchy and forlorn melody to smear itself over his canvas. Traces of sound blur into one another as the track plays out with the cues presented earlier on the tape. As the song drives itself into a forlorn bliss, you can't help but fall for the beautiful despair.

The B-side-long "Elurra Urratu" plays the lushly elusive counterpart, existing in the tonal plane of orchestral, krautish ambient music. Accompanied by a roiling rhythm of gated noise, the chordal display bows it's muted melodrama across the canvas. Think Stars of the Lid remixed by Axel Willner, or Aphex Twin's "Donkey Rhubard" retooled by Donnacha Costello.

Cannibal Corpse's George "Corpsegrinder" Fisher stops by for an interview