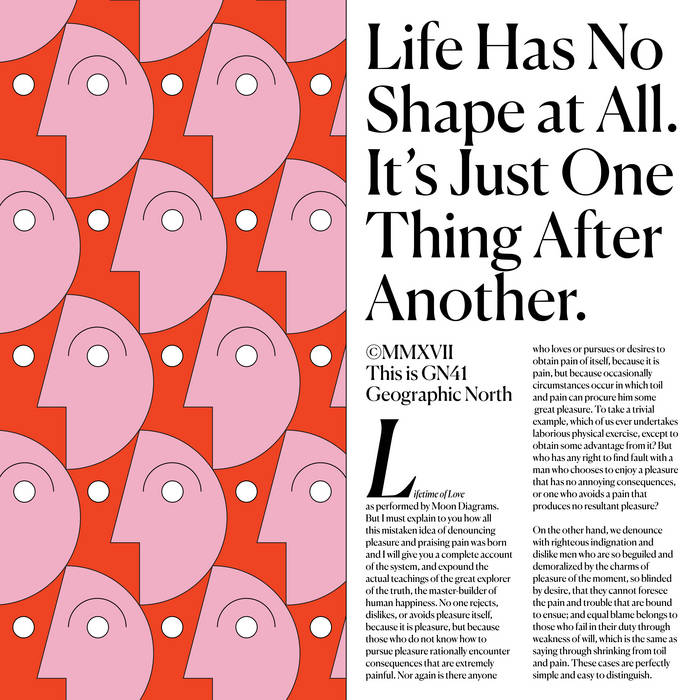 Archuleta follows sudden fits of inspiration or moments of chance, letting the unknown happen naturally while still confining himself to a specific set of boundaries. Samples were often taken from thrift store-sourced LPs, removed from their sleeves and chosen at random to find loops and textures. Elsewhere, Archuleta would anonymize digital songs and sound files, erasing track names, and re-recording new versions of the randomized mixes.

'Lifetime of Love' is the result of three extended fugue states, each marked by specific moments of catharsis. In 2007, between the release of Deerhunter’s breakout LP Cryptograms and 2008 LP Microcastle, Archuleta began his earliest solo experiments. The nascent exploration was enough to free himself and create sounds without inhibition. “Bodymaker” and “Nightmoves” are products of Archuleta’s earliest solo recordings, capturing his willingness to venture outside of the taut, mesmerizing drone rock of his main band. The chilling, ambient techno of “Nightmoves” perfectly foils and compliments the broodingly sullen but sincerely beautiful shuffle into the dark.

Between 2012 and 2015, Archuleta experienced a reset of sorts, including the collapse of his marriage (a 10-year long relationship), touring support for Ariel Pink and James Ferraro, and a rekindled interest in his solo material. He began actively cutting himself off from a number of personal relationships and experimented with various drugs to begin recording again. Locking himself in his practice space, Archuleta would use only the spare instruments he found laying around in recording sessions. This period yielded a disparate mix of sonic sketches, from eerily bucolic choir recordings (“Playground”), dusty art-pop (“Moon Diagrams”), and infectiously jubilant dance pop (“End of Heartache”).

For the final period, Archuleta found inspiration following an extended stint in Berlin, when he had flown out of the US on Christmas day, largely estranging himself from his friends and family. While holed up in the Michelberger Hotel, Archuleta fully intended to finish his debut LP. Instead, he remained in a state of relative isolation, haunting the hotel and taking in the city’s dark energy. After three weeks, Archuleta returned home in Atlanta, without having made much headway on the album. Feeling unproductive, depressed, and marred by jetlag, Archuleta resolved to finish the LP, working in a three-day fury of productivity that resulted in “Blue Ring,” “Ghost and the Host,” “Magic Killer,” and the final edits of 'Lifetime of Love.'

Subtly grandiose and quietly epic, the album explores a hopeful and curious beginning, a morose middle, and a bittersweet, optimistic end.

Cannibal Corpse's George "Corpsegrinder" Fisher stops by for an interview